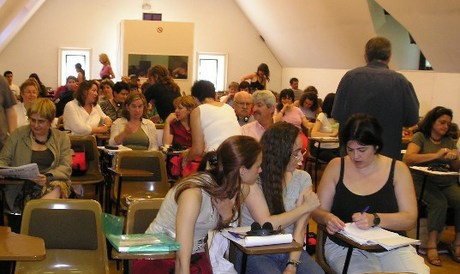 For the third of my three lectures given as part of my short course on writing on the Internet 11th-13th July 2007 during the XXVI Summer Courses of the University of the Basque Country in San Sebastian, Spain, I was asked to focus on Resources and ideas for learning to write on line.

Language technologies and engineering offer us powerful resources to help us write and teach writing, such as multi-user virtual environments, pen pals and class collaboration projects, blogging, wikis, Google docs and mapping tools. These greater-picture enhancements can make use of lower-level spelling software, readability analysis systems, automatic assisted translation, terminology data base, plurilingual textual corpora, etc. We also have software that register our writing process, huge on line writing labs, with lots of materials, outlines and information. How we can use these resources in the classroom and in on line courses? What implications do these resources have in the learning of writing?

- The text of this lecture is here:
http://www.homestead.com/prosites-vstevens/files/efi/papers/tesol/ppot/2007/basque3.htm
- The slide show is here:
http://www.slideshare.net/vances/lecture3-putting-the-forces-in-motion/
- The recording of Lecture 3 is here: https://sas.elluminate.com/site/external/launch/play.jnlp?psid=2007-07-13.0325.M.7AE801FFB697DA460D4BF25AA8C21B.vcr

Send to Friends | Leave a Comment | Download | Permalink
Summer courses in Spain 2007 - Lecture 2: Web 2.0 and Social Networking: What you need to know about these concepts to get your students colloborating online, using tags, rss, and aggregation
July 21, 2011 01:46 PM PDT 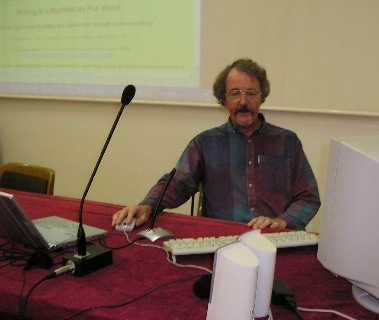 Lecture 2: Web 2.0 and Social Networking: What you need to know about these concepts to get your students colloborating online, using tags, rss, and aggregation

This is the second of three lectures given as part of my short course on writing on the Internet 11th-13th July 2007 during the XXVI Summer Courses of the University of the Basque Country in San Sebastian, Spain. The second lecture was supposed to address L2 learning with an electronic approach.

More and more L2 courses incorporate Internet and on line learning activities as part of the syllabus and teaching materials. How does this change our teaching practice? Which are the good teaching practices in an on line course and in a blended-learning course? What free and collaborative online tools exist to help us do it better?

- The text of this lecture is here:
http://www.homestead.com/prosites-vstevens/files/efi/papers/tesol/ppot/2007/basque2.htm
- The slide show is here:
http://www.slideshare.net/vances/lecture2-writing-and-collaboration-via-web-20-and-social-networking/
- The recording of Lecture #2 is here: https://sas.elluminate.com/site/external/launch/play.jnlp?psid=2007-07-12.0344.M.7AE801FFB697DA460D4BF25AA8C21B.vcr

Send to Friends | Leave a Comment | Download | Permalink
Summer courses in Spain 2007 - Lecture 1: Multiliteracies and the changing landscape of communication in a world without arbiters of what gets published
July 21, 2011 01:03 PM PDT 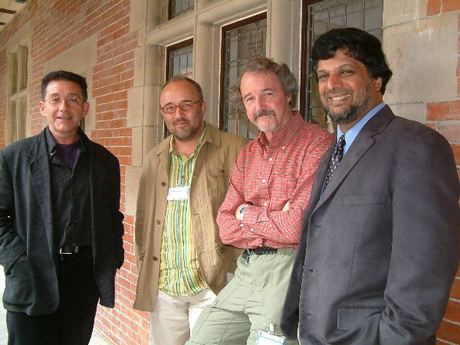 I was invited to teach a short course on writing on the Internet 11th-13th July during the XXVI Summer Courses of the University of the Basque Country in San Sebastian, Spain. The course is entitled "Learning to write in a global and plurilingual world" and my part is to give 3 talks (60' exposition + 15' debate) on Internet (Electronic writing, On-line learning to write, Electronic approach to language learning -focus on writing). There is more information about the university and these courses here: http://www.sc.ehu.es/cursosverano. In order to have something to talk about I instigated a writing project here: http://writingmatrix.wikispaces.com/. I created a Moodle component here: http://www.opensource.idv.tw/moodle/course/view.php?id=46 and a course portal here: http://www.vancestevens.com/writing.htm. I also wrote out the text of each lecture, uploaded the slides, and left recordings of the lectures themselves as in the first one, here:

Lecture 1: Multiliteracies and the changing landscape of communication in a world without arbiters of what gets published

Internet, electronic genre and writing.
Several analogical literacy practices have migrated to Internet. Now we write emails, wikis, blogs, chats or webs. We read on a screen and write with the keyboard and mouse. How has Internet changed literacy practices? Which are the most relevant electronic genres in L2 learning, why, and how can we use them?

- The text of this lecture is here:
http://www.homestead.com/prosites-vstevens/files/efi/papers/tesol/ppot/2007/basque1.htm
- The slide show is here:
http://www.slideshare.net/vances/lecture1-san-sebastian-2007-internet-electronic-genre-and-writing/
- The recording (up to the point my computer crashed) is here

Send to Friends | Leave a Comment | Download | Permalink
Getting the Most Out of Web 2.0 for ESP: advantages of using tags and technorati for a community of bloggers in the ESL/EFL/ESP classroom
July 21, 2011 06:38 AM PDT

Tuesday, January 22, noon UTC (GMT) - I was invited to be a guest speaker for the EVO 2008 session, Getting the Most Out of Web 2.0 for ESP, on the advantages of using tags and technorati for a community of bloggers in the ESL/EFL/ESP classroom. http://evo08esp.pbwiki.com/Week%202.

Send to Friends | Leave a Comment | Download | Permalink
The Multiliterate Autonomous Learner: Teacher Attitudes and the Inculcation of Strategies for Lifelong Learning
July 21, 2011 06:08 AM PDT 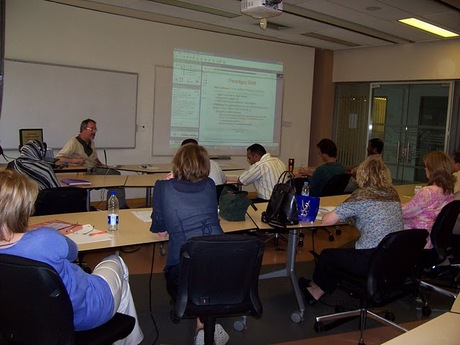 I repeated my Exeter presentation at an event April 12, 2008, 11:15 to noon in Abu Dhabi at the Abu Dhabi Men's College in Abu Dhabi. I started with a short report from the LA SIG Preconference Event in Exeter (IATEFL) which I attended briefly, I then did the larger presentation on The Multiliterate Autonomous Learner: Teacher attitudes and the inculcation of strategies for lifelong learning, "with focus in particular on the influence of teacher attitudes towards technology as it might impact autonomy in the newer generations of learners."

- I recorded the presentation in Elluminate and stored the recording online here: http://tinyurl.com/468qrp.
- I used the Exeter slide show with hyperlinks, http://tinyurl.com/5qmuxd
- A photo album was put up to archive the event: http://picasaweb.google.com/tailearn/IndependentLearningResearchMorning2008

- I produced a paper prior to this: Stevens, Vance. (2007). The Multiliterate Autonomous Learner: Teacher Attitudes and the Inculcation of Strategies for Lifelong Learning, in Independence,Winter 2007 (Issue 42) pp 27-29. Retrieved February 17, 2008 from http://www.learnerautonomy.org/VanceStevens.pdf.
- The paper is also on my site here: http://www.homestead.com/prosites-vstevens/files/efi/papers/iatefl/exeter2008/lasigworm.htm and is mirrored as a blog post here: http://advanceducation.blogspot.com/2007/07/multiliterate-autonomous-learner.html.
- My slides are posted here: http://www.slideshare.net/vances/lets-start-with-teacher-autonomy-multiliteracies-and-lifelong-learning/.
or http://tinyurl.com/5qmuxd
- Jo Mynard did a nice writeup of my talk on her blog here: http://iateflexeter2008.blogspot.com/2008/04/multiliterate-autonomous-learner.html 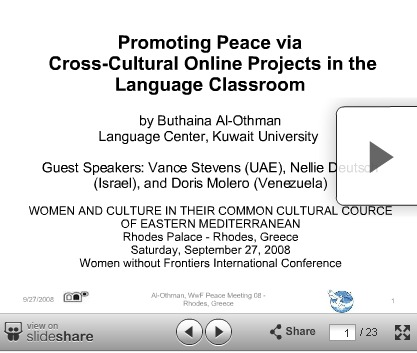 Saturday, September 27, 2008, I was invited to assist at a distance along with Nellie Deutsch and Doris Molero in a presentation given by Buthaina Alothman at the Women without Frontiers International Conference 2008, held physically in Rhodes, Greece, on September 26-28.

The presentation focused on ways we can promote peace and reduce discrimination against gender, origin, religion, and color in our societies through Cross-Cultural online projects in the Language Classrooms. 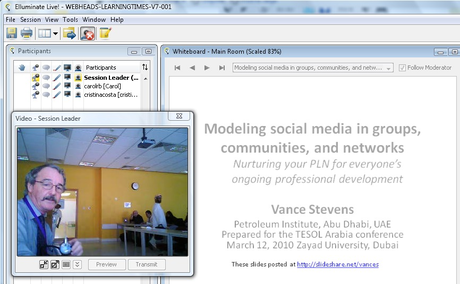 I was invited to present at the TESOL Arabia Conference 12 March, 2010 at Zayed University in Dubai, UAE on "Modeling social media in groups, communities, networks: Nurturing your PLN for everyone’s ongoing professional development" - Abstract: This presentation examines social networking in groups, communities, and networks. Teachers must be trained not only IN use of social media, but THROUGH use. This presentation suggests how teachers interact with communities of practice and distributed learning networks where participants are modeling optimal ways of using social media in teaching. I recorded the presentation on ZU's robust and ubiquitous wireless. 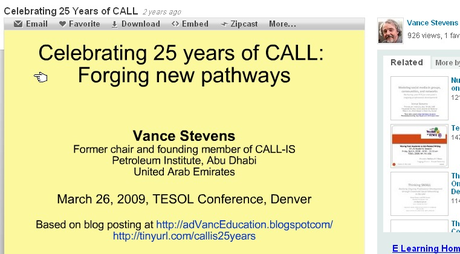 I was an Invited Speaker at two sessions at the 43rd Annual TESOL Convention in Denver Thursday March 26 through Saturday March 28, 2009:

One was at the anniversary event "Celebrating 25 years of CALL: Forging new pathways" put on by the CALL Interest Section. ABSTRACT: "As the CALL-IS celebrates the 25th Anniversary of its founding, former CALL-IS chairs and experts in CALL reflect on historical and current developments in theory, research, and practice. Having witnessed the changes over the years, they will highlight major achievements, paths that have been forged, and intriguing future directions."

The colloquium was organized by Sandy Wagner. Other speakers were Christine Bauer-Ramazani, Elizabeth Hanson-Smith, Claire Bradin Siskin, Phil Hubbard, and Karen Price. There is a wiki at http://colloqtesol09.pbwiki.com/.

Vance Stevens spoke after Roger Kenner, and Deborah Healey on the beginnings of CALL and the CALL-IS—from vision to reality and beyond

The "vision to reality" part of my presentation was started at Stevens, V. (2003), How CALL-IS Began, which first appeared in an email sent to all CALL-IS members in Fall 2003 via the TESOL organization, and now resides here: http://www.vancestevens.com/papers/tesol/newsletter/callis_began.htm

I address the "beyond" part in this blog posting: http://advanceducation.blogspot.com/2009/03/celebrating-25-years-of-call-forging.html
- My slides: http://www.slideshare.net/vances/celebrating-25-years-of-call
- The session was recorded at http://tinyurl.com/cd3jep or https://sas.elluminate.com/site/external/jwsdetect/playback.jnlp?psid=2009-03-26.1302.M.7AE801FFB697DA460D4BF25AA8C21B.vcr

The recording here was extracted from that Elluminate file. Accoustics were so poor at the beginning of the session that the talks by Roger Kenner and Deborah Healey were incomprehensible and had to be edited out. The recording begins with my talk, which is clear, and then continues for another hour with questions and answers, a talk by Elizabeth Hanson-Smith, and so on. 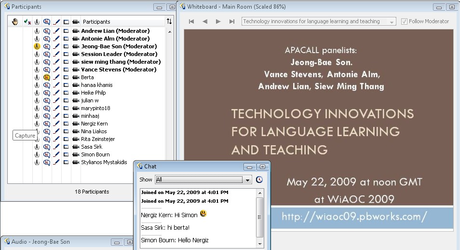 For the third time in 5 years I coordinated the 3rd bi-annual Webheads in Action Online Convergence held May 22-24, 2009, http://wiaoc.org.
Events are listed here: http://wiaoc09.pbwiki.com/schedule

I participated in two presentations on May 22, 2009, this one entitled "Technology innovations for language learning and teaching." 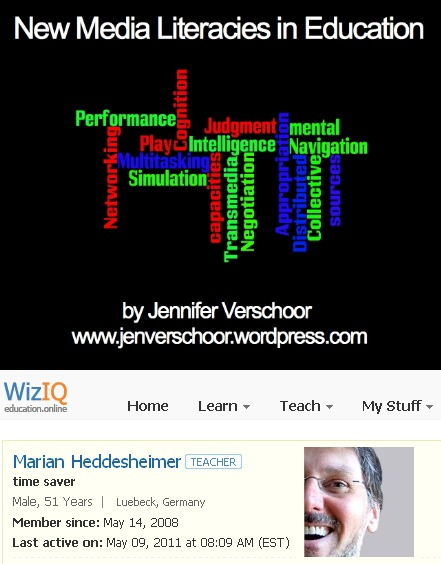 January 10 - 19, 2010, I taught a course entitled 21st Century Skills for Professional Development Online as part of the program of The Petroleum Institute AUP Computing Professional Development and Community Courses. The course began with a 1-hour presentation explaining the annual TESOL-sponsored Electronic Village Online (http://www.slideshare.net/vances/you-can-participate-in-electronic-village-online-2882887) and proceeded in four 1.5-hour face-to-face class sessions. Skill-building began with synchronous tools and RSS feed readers and proceeded in the second week to synchronous tools. Marian Heddesheimer from Germany and Jennifer Verschoor in Argentina were invited to the last session, which was recorded and can be played back here:

Other online spaces include:

- The course was announced via a flyer that became a Google Doc and portal for the course: http://tinyurl.com/21centuryskills4pdo
- Our blog: http://justcurious.posterous.com became our most interactive conversation space for the course and has since developed into one of Vance's favored online spaces for practical applications of educational technology.

Podcasts on things Webhead and Multiliterate

This code is placed here to complete my CLAIM to this blog on Technorati: Technorati Profile

Let this podcaster know that you like their show and want another episode: